Skip to content
«Back To All Insights
Blog
State/Local

Mirror Lake is a tidally influenced lake just outside historic Dover, Delaware, on the St. Jones River. The lake faces contamination by polychlorinated biphenyl (PCB) and mercury, which negatively affects the habitat, community, and marine wildlife. Due to nearby residential, commercial, and industrial developments, PCB levels in the lake continue to be above regulatory limits.

Historical industrial activities along the river led to releases of contaminants, including PCBs, mercury, and organic pesticides, which have accumulated over decades in the river system’s sediments. These contaminants can be harmful to the community and aquatic life, especially organic contaminants such as PCBs, as they can biomagnify up the food chain, leading to greater PCB concentrations in organisms higher up the food chain. Since the manufacturing ban on PCBs in the late 1970s, sediment concentrations within Mirror Lake have been recovering naturally, but at a rate that would take several decades to achieve acceptable recovery.

Fish consumption advisories were an issue for the entire St. Jones River, with habitat restoration and contaminant remediation focused on Mirror Lake.

In collaboration with the Delaware Department of Natural Resources and Environmental Control and the University of Maryland Baltimore County, the sediment cleanup remedy at Mirror Lake aimed to enhance the sorption capacity of native sediments to reduce the exposure of organic contaminants that contribute to fish consumption advisories. The ultimate goal of the project was to decrease PCB levels in Mirror Lake through the application of activated carbon.

Activated carbon (AC) is a form of carbon processed to have small, low-volume pores that increase the surface area available for adsorption or chemical reactions. It is used to purify liquids and gases in a variety of applications, from municipal drinking water to industrial pollution control. AC is produced from carbonaceous source materials, such as coal, charcoal, coconuts, and wood. 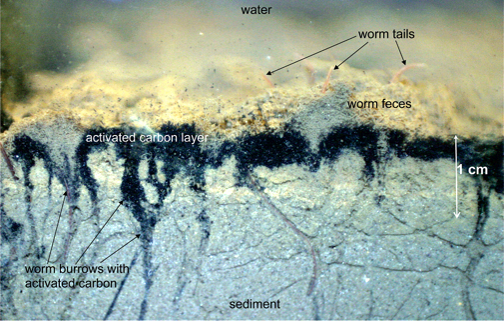 SediMite is a proprietary pelletized mixture of AC, sand, and clay. Once immersed in water, the pellets begin to dissolve, releasing the AC for incorporation into sediments. (Source: Sun and Ghosh 2007)

The direct application of AC to contaminated sediments is a remediation technique to reduce porewater bioavailability that had previously only been used on pilot-scale studies in the United States, with the potential of AC being a low-impact alternative to environmental dredging and capping. However, prior to this application, it had yet to be successfully used as an overall remedy. Additionally, there was a lack of information on the long-term stability of placed AC following a full-scale field application and on whether reductions in uptake in the food chain would be evident.

Because of the link between PCB concentrations in Mirror Lake sediment and fish tissue, PCBs in sediments were the focus of the remediation. 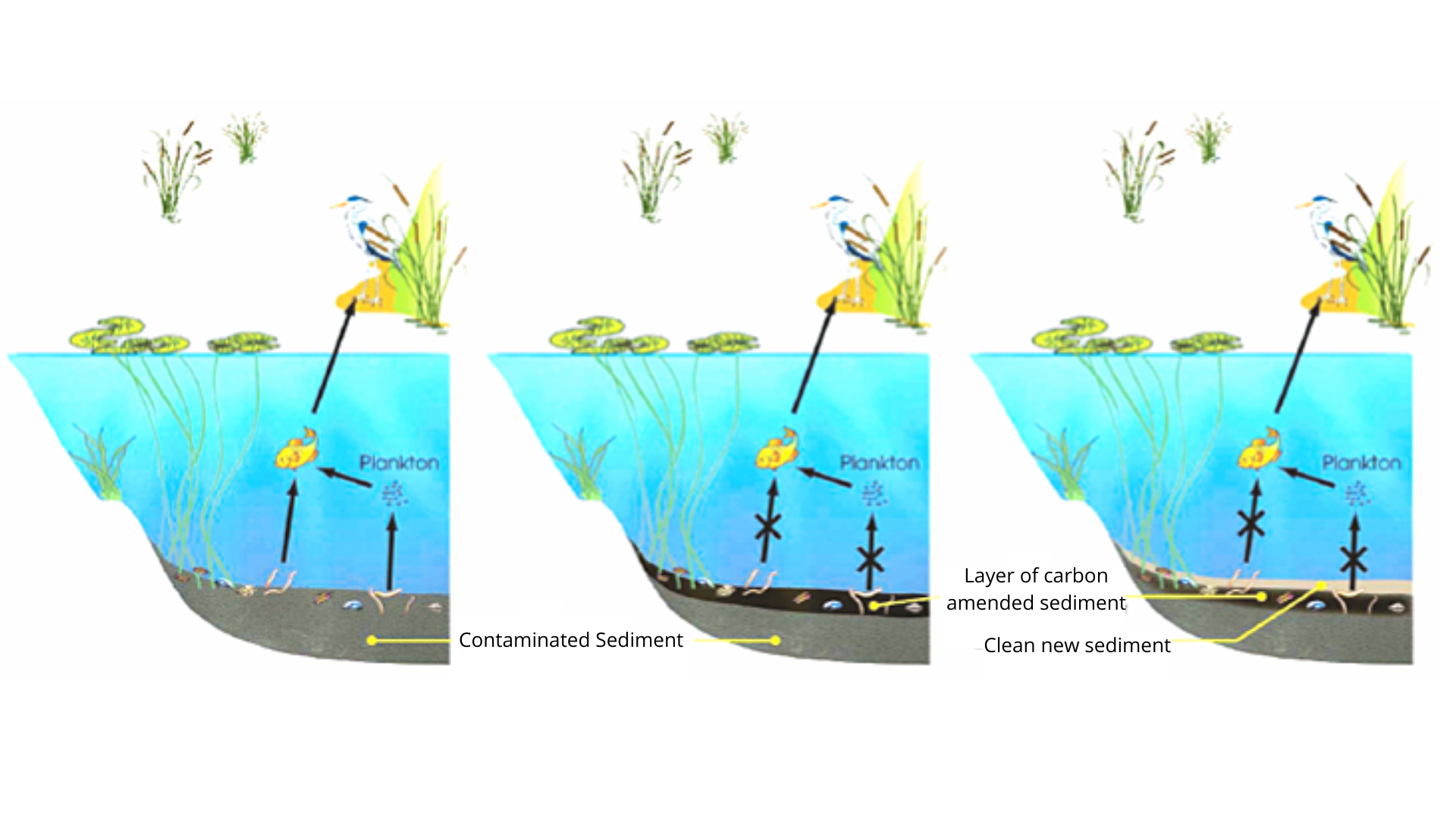 AC binds both freely dissolved and sediment-associated contaminants, with benthic organisms being the most important link for transfer of hydrophobic contaminants up trophic levels. (Source: Ghosh et al. 2011)

A challenge identified during early planning evaluation was how best to best deliver the AC amendment to the surface sediments. SediMite broadcast via telebelt was selected as the primary placement method to deliver AC through the water column to surface sediments across the site. In November 2013, approximately 36 tons of AC was applied to the lake over a 2-week period. This enhanced the sorption capacity of native sediments in the lake, reducing the exposure of bioaccumulative pollutants that contributed to fish consumption advisories.

Performance monitoring of the AC amendment was conducted immediately following construction, in addition to 1 and 3 years following application and construction. Sediment porewater and fish tissue reductions were significant, with PCB concentrations reduced by up to 80% and 70%, respectively, demonstrating how implementing AC is a viable, effective sediment remediation technology.

79 tons of SediMite was applied to the entire 5-acre lake, becoming the largest application of AC at the time.

In addition to sediment remediation, the team also incorporated several ecological restoration features, including removal of invasive plant species along the banks of the lake, conversion of an existing sandbar to an intertidal wetland, reinforcement of an eroding bank with double-stacked coir logs and mulch, and installation of two instream rock vanes to direct flow and protect the new intertidal wetland.

Ultimately, Mirror Lake was the first full-scale remediation in the United States to use a direct application of AC into native sediments, proving to be a major step in advancing AC amendment as a viable and effective sediment remediation technology. Entire results are available in the paper, “Full-Scale Application of Activated Carbon to Reduce Pollutant Bioavailability in a 5-Acre Lake,” published by the American Society of Civil Engineer’s Journal of Environmental Engineering.

A Tool to Engage and Empower: GIS Story Maps