Skip to content
«Back To All Insights
Engineering
Blog

Addressing PFAS in the Environment: The Implications of Precursors

Per- and polyfluoroalkyl substances, or PFAS, constitute a complex family of synthetic chemicals that have been used extensively in industrial processes and consumer products since the 1940s. They repel moisture, grease, and stains, reduce friction, and suppress fire. PFAS are used in products including food packaging, stain- and water-repellent fabrics, nonstick coatings, polishes, waxes, paints, cleaning products, healthcare equipment, and fire-fighting foams.

There are concerns that exposure to PFAS can adversely impact human health and ecological communities. Research into their distribution in the environment increased in the early 2000s, when it became possible to detect these chemicals at low concentrations. Since then, PFAS have been found throughout the world, both near discharge locations and far from any known source areas, from the tropics to the poles. They have been found in soils, sediments, groundwater, surface water, and the atmosphere. Additionally, PFAS have been discovered in both aquatic and terrestrial organisms—including people. Some PFAS are persistent in the environment, meaning they do not break down, or can take a long time to break down, and can bioaccumulate in living organisms throughout the food chain. 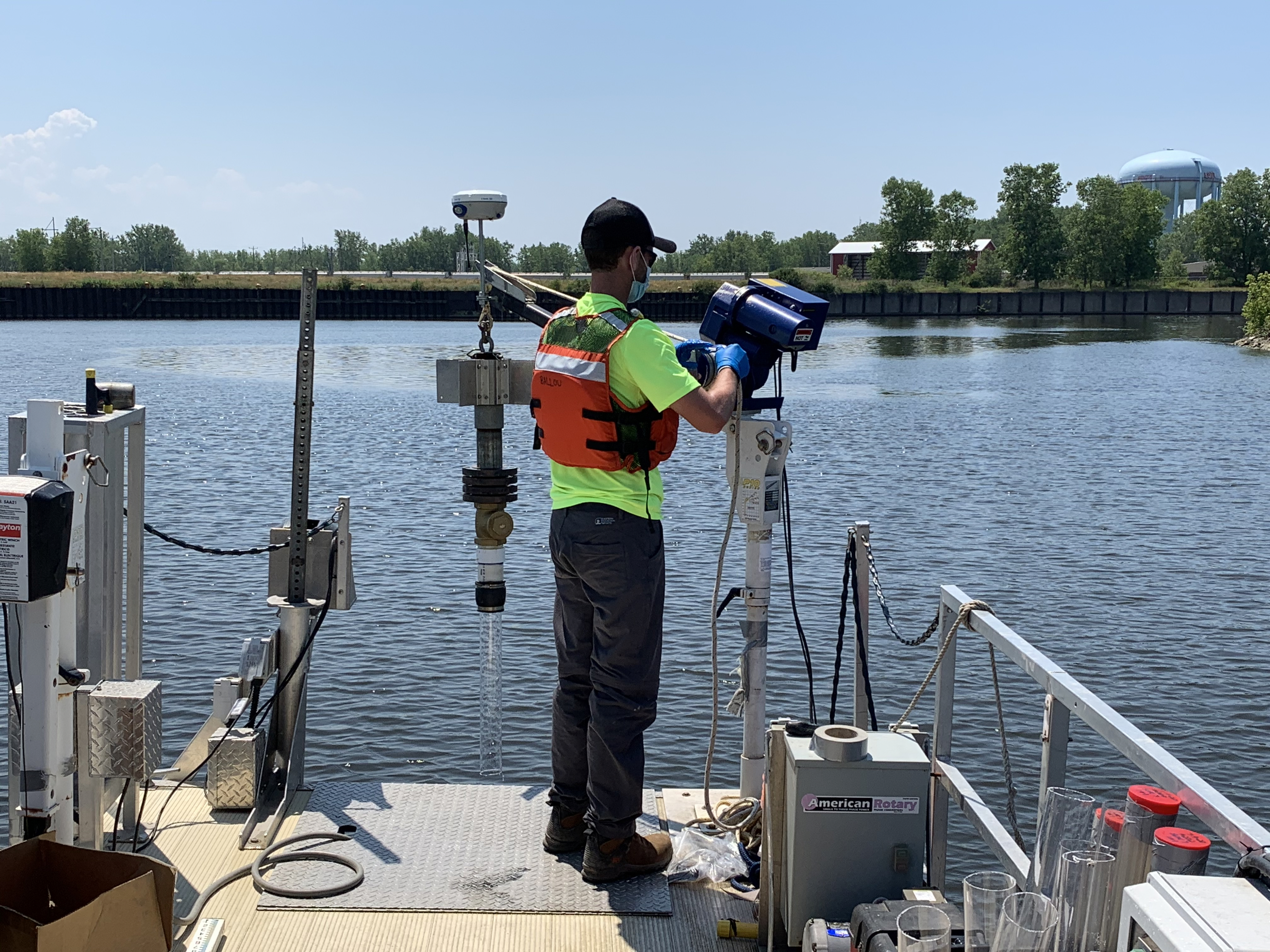 PFAS can be found in some clothing, sampling equipment, sunscreen, and other products associated with sample collection, and therefore special considerations must be taken when sampling for PFAS.

The EPA has published health advisories for perfluorooctane sulfonic acid (PFOS) and perfluorooctanoic acid (PFOA), two of the most commonly occurring chemicals in the PFAS family. On February 22, 2021, the EPA announced a proposal to require a subset of public water systems to collect national occurrence data for 29 PFAS as part of the fifth Unregulated Contaminant Monitoring Rule program (“UCMR 5”). On the same date, the EPA also announced that it will propose and enact a national primary drinking water regulation for PFOS and PFOA. In addition, states are developing standards for various PFAS in drinking water, groundwater, soil, and fish. To date, these regulations have largely focused on the legacy pollution from historical releases, as older, long-chain compounds such as PFOS and PFOA are no longer manufactured in the United States. Future studies and regulations may be developed to address shorter-chain PFAS compounds in the environment.

Understanding the Behavior of PFAS in the Environment

PFAS have a wide range of chemical structures and properties, and accordingly exhibit a wide range of behaviors in the environment. Some PFAS are highly volatile and therefore can circulate globally in the atmosphere, while some are soluble in water and circulate in lakes, rivers, and the ocean. Others have a strong affinity for soils or sediments and may persist locally for a significant period of time. PFAS sorb to organic matter and can also accumulate at the interface between air and water in soils above the water table. Many PFAS can be positively charged, negatively charged, or both, depending on their molecular formulas and the pH of the environment. This adds a level of complexity to the behavior of PFAS in the environment, in comparison with many persistent nonionic chemicals that have received so much attention in past decades, such as PCBs and dioxins. 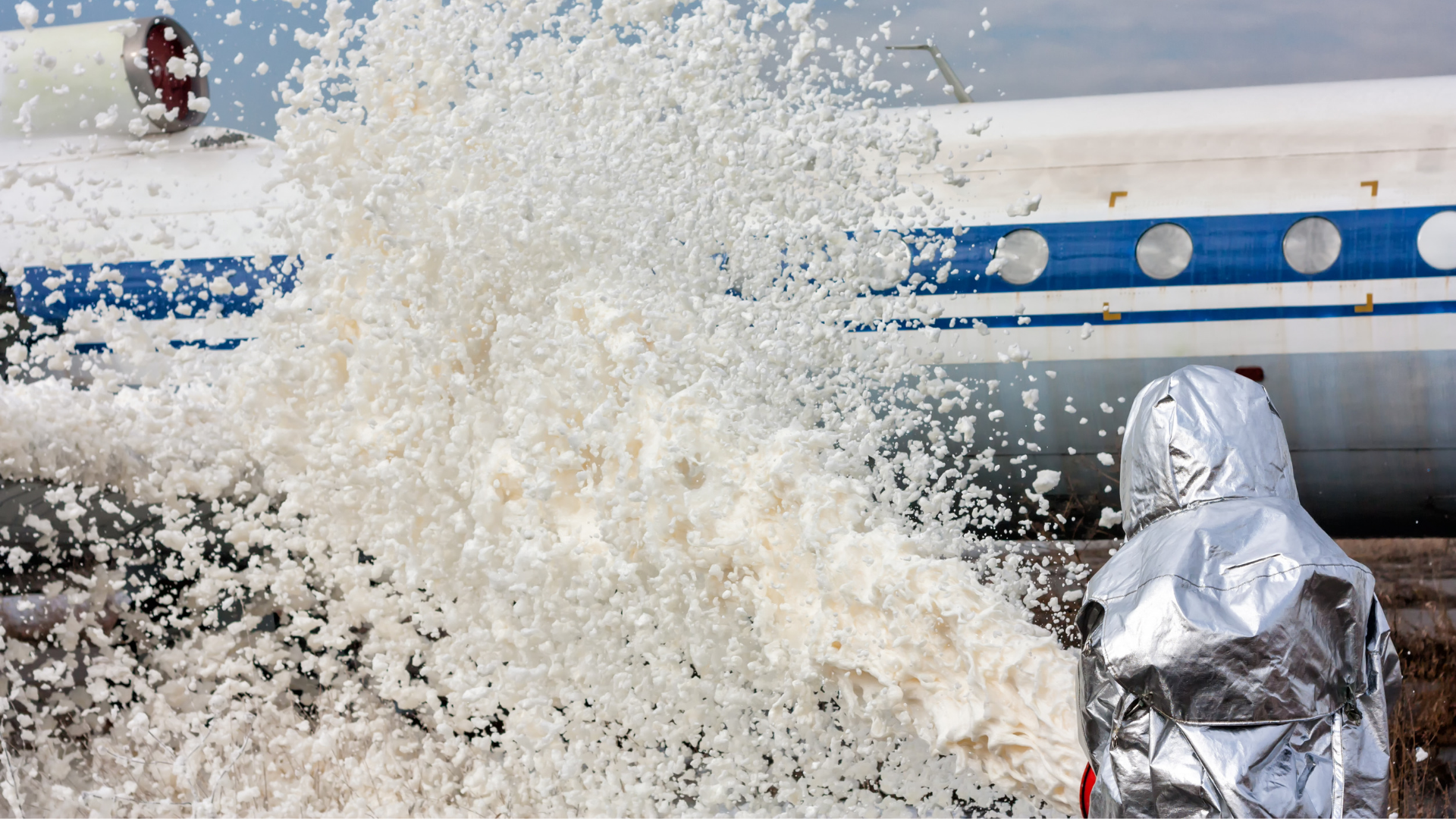 Foams containing PFAS are often used to fight fires at airports, due to the chemicals’ ability to extinguish petroleum-based fires.

There are several thousand PFAS, of which only a few have been studied in detail. This is, in part, because currently only about 40 PFAS can be readily identified and measured in commercial laboratories. In addition, the compounds released into the environment have changed over time: while production of longer-chain PFAS has been discontinued in many parts of the world, a new generation of shorter-chain compounds are now being manufactured. As scientific understanding expands, it is reasonable to expect that the regulatory community will continue to evaluate this large, complex group of compounds.

Evaluating the Influence of Precursors

Once released into the environment, many PFAS transform into other PFAS, and therefore can be considered precursors of the other PFAS. The transformation chains of precursors eventually lead to one of several terminal end products, that is, chemicals that do not further transform in the natural environment. These terminal end products are called perfluoroalkyl acids, or PFAAs. PFOS and PFOA are the highest priority PFAAs from a regulatory point of view.

Transformation can occur in the environment or within the tissues of organisms. The following is an example of a precursor transformation pathway that is known to occur in fish: 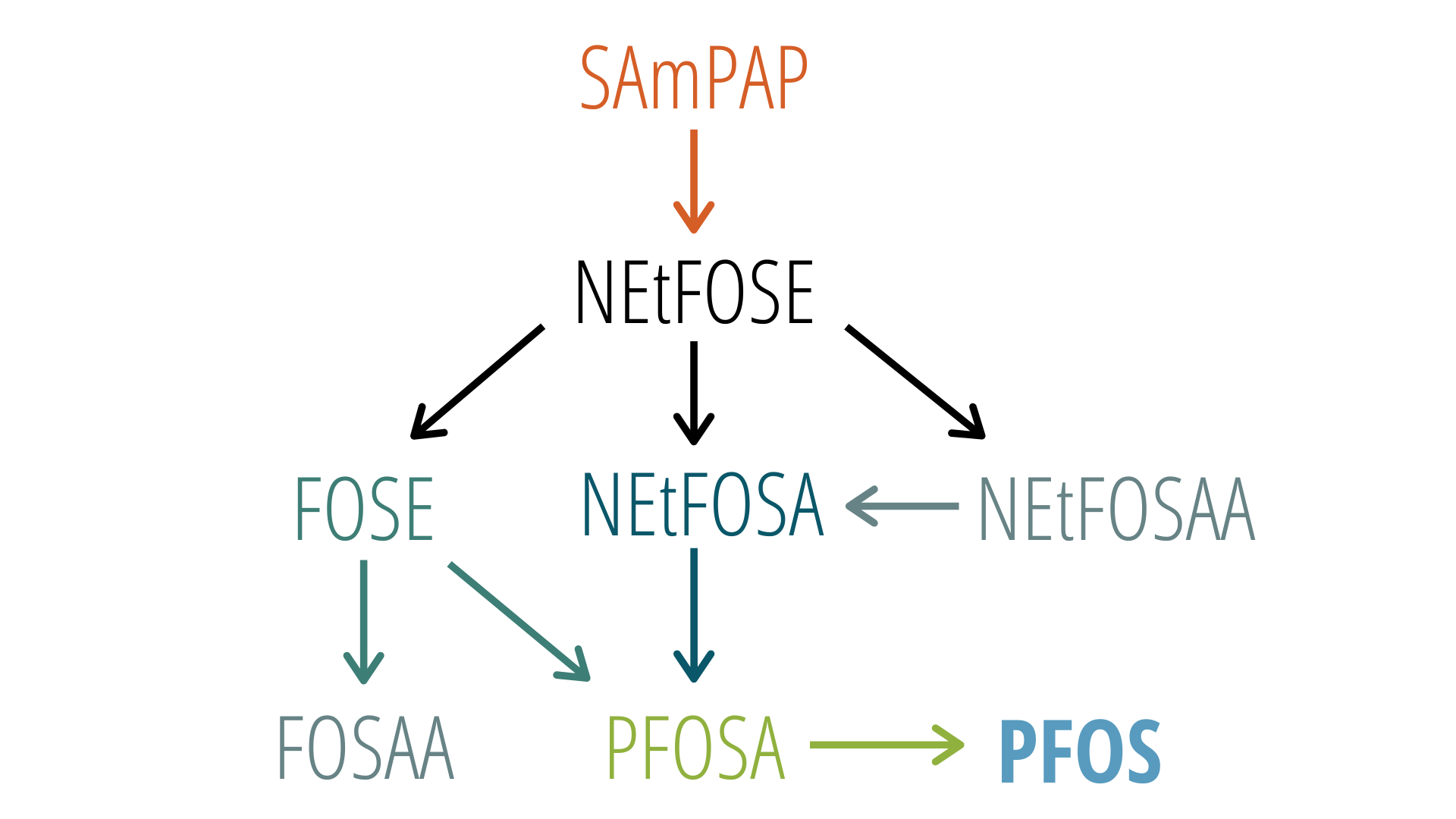 This is an example of a PFAS transformation pathway that occurs in fish, with acronyms referring to individual PFAS. SAmPAP was manufactured historically in the United States in large amounts and is likely still manufactured in other countries.

As mentioned above, many of the compounds that comprise PFAS have been poorly studied. This means that our understanding of precursor transformation pathways is likely to be incomplete. This lack of knowledge raises important practical questions as to how we address PFAS contamination in the environment.

Solving the Right Problem: PFAA Precursors in the Environment

Understanding the behavior of PFAA precursors in the environment, especially their transformation, is important when setting water quality criteria, establishing fish consumption advisories or regulations, and addressing contamination at specific sites. For example, a reasonable approach to reducing PFOS levels in fish might include a field sampling program focused on PFOS levels in surface water, sediments, and groundwater. But if the contamination source is actually a precursor that has transformed into PFOS within the food web, then limiting the focus of an investigation to PFOS may not address the correct contamination source. This may lead to an ineffective cleanup. Ultimately, understanding precursors and their transformation is key to successfully removing these chemicals from the environment.

At Anchor QEA, our research focuses on understanding the conditions under which precursors may be important to human health and the environment. This involves integrating information gained from field and laboratory PFAS studies with our understanding of fate and transport processes in surface water and groundwater, as well as bioaccumulation processes.

As part of this effort, we are developing a suite of mechanistic models, including a bioaccumulation model, a coupled sediment and surface water fate and transport model, and a groundwater fate and transport model, all of which are designed to better understand how precursors behave, transform, move within the environment, and produce elevated concentrations of PFAAs. By gaining insight into the entire transformation process, our teams can use these models to more accurately identify contamination sources. Our goal is to use that understanding to develop cost-effective management programs for sites with unacceptable human health and ecological risks due to PFAS.

This is the first in a series of “Understanding PFAS in the Environment” articles. Future blogs in the series will provide more information on the bioaccumulation model, the sediment and surface water model, and the groundwater model.

Anchor QEA works with REGENESIS to Reduce PFAS in Groundwater