Life Is a (Fish) Highway

While Pike Place Market continued to bustle, caffeine seekers frequented cozy cafes, and sea otters kept afloat at the Seattle Aquarium, the downtown waterfront area has been transforming behind the scenes for the better part of a decade. The origins of that transformation, however, extend back much further.

Over time, during the 1920s-era, timber-supported Elliott Bay Seawall had been exposed to the erosive tidal forces of Puget Sound and marine boring organisms—becoming highly vulnerable to seismic events in the process. The marine ecosystem had also significantly degraded due to industrial and urban development. As part of a major downtown environmental restoration and revitalization project, the City of Seattle sought to improve seawall stability, expand public amenities, and improve the nearshore marine environment by replacing the seawall, installing a new cantilevered sidewalk, and adding fish-friendly habitat features.

Improving the Habitat to Support a Healthy Marine Ecosystem

The Elliott Bay Seawall Project planning and permitting phases began in 2010, and construction and environmental restoration started in the fall 2013 and ended in July 2017. In that time, the City replaced the aging and deteriorating seawall, WSDOT replaced the overhead Alaskan Way viaduct with a tunnel, and the City provided substantial habitat improvements to the Elliott Bay shoreline. Finally, the associated follow-up HIZ was completed between November 2018 and December 2019.

Habitat improvements included an intertidal habitat corridor (the “fish highway”), that runs the length of the seawall and textured precast concrete habitat shelves on new, textured concrete seawall face panels. Above, a cantilevered sidewalk that extends over the water includes light-penetrating sidewalk panels constructed with glass pavers, allowing sunlight to reach the water below. The increased light supports macroalgae and invertebrates that attract juvenile fish and provides both a shallow, lighted corridor and food during their migration along the shoreline.

The final piece of the overall project was the creation of the HIZ, located in Elliott Bay between Washington Street and Yesler Way. The HIZ “pocket beach” is located near the Duwamish River, where juvenile salmon make their way to the Pacific Ocean, and connects with the “fish highway,” providing an inviting entrance to the migratory pathway.

These days, if you head to the downtown Seattle waterfront area and look down between the piers, you might just be greeted by a cluster of salmon, illuminated by natural light sneaking through the sidewalks above. 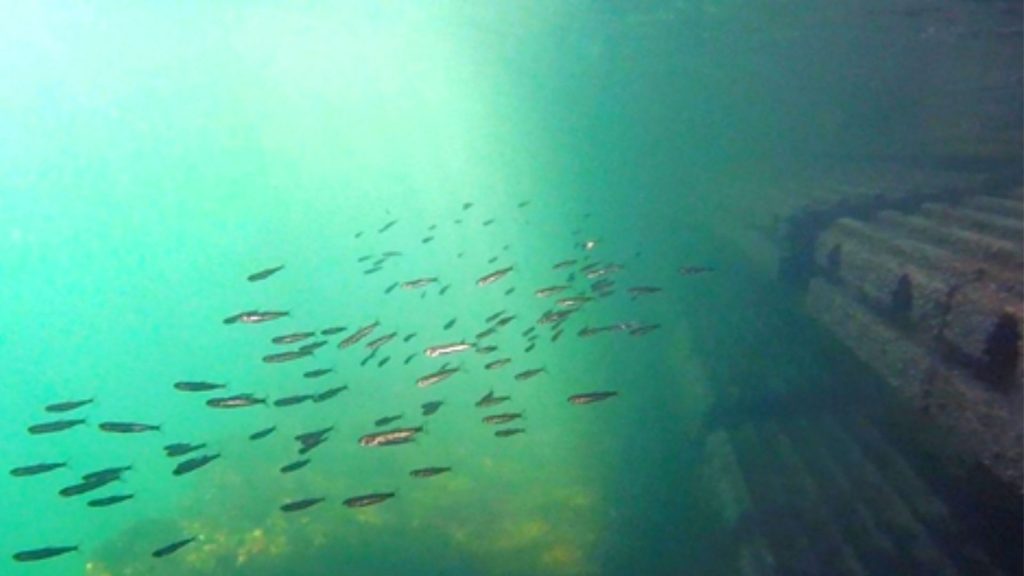 Photo: University of Washington School of Aquatic and Fisheries Sciences