The Chehalis Basin, a region rich in native wildlife, working lands, and cultural significance, is economically and ecologically vital to Washington state and the region. It is also one of the only remaining river basins in the state where no salmon species are listed as threatened or endangered. And it is home to the most diverse assemblage of amphibian species in the state and numerous other native wildlife species.

With more than 3,400 miles of identified perennial streams, the 2,700-square-mile Chehalis Basin, in southwestern Washington, is the second largest watershed in the state. However, the ecosystem has been substantially changed from its historical conditions through a host of human activities (such as removal of wood from rivers, use of splash dams, channel straightening, removal of beavers, and removal of riparian forest), as well as changes in land use and climate conditions. After decades of significant degradation of habitat and natural processes, native aquatic species face a grave future.

A New Plan for the Chehalis Community and Ecological Resiliency

Anchor QEA is supporting the Washington Department of Fish and Wildlife and the Office of the Chehalis Basin to develop the Aquatic Species Restoration Plan—one half of the Chehalis Basin Strategy to reduce flood damages and sustain aquatic species. The vision of the Aquatic Species Restoration Plan is to support healthy and harvestable salmon populations, robust and diverse populations of native aquatic and semi-aquatic species, and productive ecosystems that are more resilient to climate change and human-caused stressors, while honoring the social, economic, and cultural values of the region and maintaining working lands.

The Aquatic Species Restoration Plan provides a detailed, science-based roadmap for restoring and protecting intact ecosystems of aquatic species along the basin’s rivers and streams. The actions identified through the plan plot a course toward the best chance to support aquatic species and habitat to become more resilient to climate change and human-caused stressors over the long term.

Sustaining the productivity of native aquatic species will require rebuilding ecosystem resiliency through a network of interconnected habitats. Meanwhile, climate change will significantly affect all of the basin’s species, making it critical to rebuild resilience by protecting and enhancing surface and groundwater flows and maintaining cooler water temperatures. Thus, a comprehensive long-term set of actions are needed to restore habitat in the basin.

Organizing the Approach for Long-Term Success

A key element necessary for developing a successful plan to restore the basin is to strategically prioritize essential actions, including where and when those actions should occur to provide the greatest short-term and long-term habitat and species benefits. To support the prioritization process, the basin was examined as 10 ecological regions based on underlying geology, topography, climate and hydrologic regime, and channel characteristics.

Example river and floodplain in the Basin with habitat and land uses intermixed.

Once the basin was organized into manageable ecological regions, the next key steps in developing the plan were to understand how much the basin had changed from historical conditions, identify remaining core habitats for the aquatic species, and determine locations with the greatest potential to provide substantial benefits to the species. This analysis was then used to predict the potential outcomes for habitats and species under different restoration scenarios, even with climate change and further human development.

Finally, one of the most important aspects of developing a successful Aquatic Species Restoration Plan is community involvement. Community engagement, support, and participation in the plan will be critical to its success, as nearly 80% of land in the basin is privately owned. It will be extremely important for the Aquatic Species Restoration Plan to work in concert with other actions in the Chehalis Basin Strategy, to reduce flood damages and build resilient ecosystems and communities that sustain aquatic species and the livelihoods of the people in the basin for future generations to come.

The Skookumchuck River is a key tributary to the Chehalis River and a current stronghold for spring Chinook salmon in the basin. The Skookumchuck River was selected as an Early Action Reach (pilot project) to begin making restoration progress and to demonstrate some of the actions envisioned for broader use in the Aquatic Species Restoration Plan.

To develop the restoration project for the Skookumchuck, data and modeling, along with an assessment of the site’s physical conditions, water flow, and existing habitat, helped identify problems and opportunities within the reach. The purpose was to comprehensively assess the diversity of habitats and natural processes that occur, and strategically look at the best protection and restoration options. 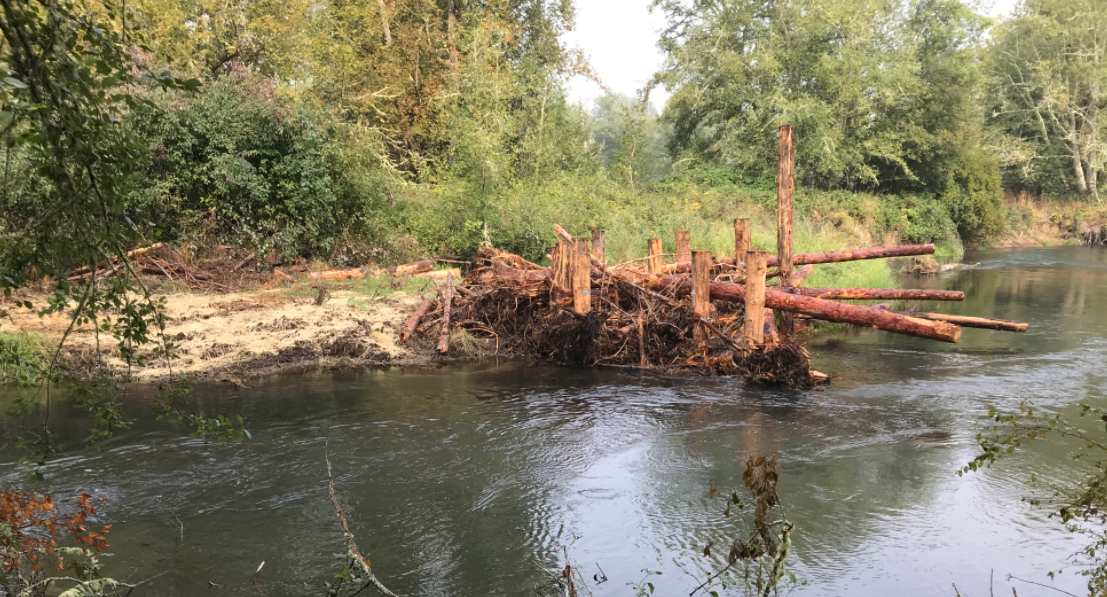 A pilot project to improve habitat in the Skookumchuck River is an important learning opportunity for numerous other projects in the Chehalis Basin.

For example, river habitat quantity and complexity is low in this important reach for spring Chinook salmon. Thus, one solution is to place large wood structures, which provide added habitat complexity, retain and recruit sediment and wood, and promote floodplain connectivity. The project also includes riparian and oak woodland restoration to provide long-term cover, shading, and wood and nutrient recruitment to the reach, as well as habitat for many wildlife species. With the development of this restoration project, aquatic species and habitats on the Skookumchuck River will be enhanced to promote their long-term sustainability.

Ultimately, these restoration and protection measures in the Chehalis Basin will foster a brighter future for native salmon and aquatic species, along with the communities who depend on and benefit from them. The key to any healthy, thriving community starts with its land and waters, and the Aquatic Species Restoration Plan will help build resilient ecosystems that sustain aquatic species for future generations to come.