Skip to content
«Back To All Insights
Modeling
Publication
Federal

December 16, 2021 – Anchor QEA and the Virginia Institute of Marine Science

Chesapeake Bay, the largest estuary in the United States and the third largest in the world, is particularly vulnerable to human impacts. In recent decades, low dissolved oxygen and changing acidification have severely affected the Bay’s ecosystem. Excess nutrients, such as nitrogen and phosphorous from fertilizer and agriculture, enter the Bay in runoff and result in the annual formation of a “dead zone” where the water has little to no oxygen. Scientists refer to these oxygen-poor waters as “hypoxic,” meaning oxygen concentration is less than 2 milligrams per liter and too low for aquatic life to thrive.

In collaboration with the Virginia Institute of Marine Science (VIMS), Anchor QEA operates the real‑time Chesapeake Bay Environmental Forecast System (CBEFS), a computer model that predicts dissolved oxygen concentrations and forecasts environmental conditions in the Bay every day. Anchor QEA and VIMS recently released the 2021 Chesapeake Bay Dead Zone Report, which summarizes the severity of the Dead Zone during the summer of 2021 in relation to 1985 through 2020, and in relation to the past 5 years. 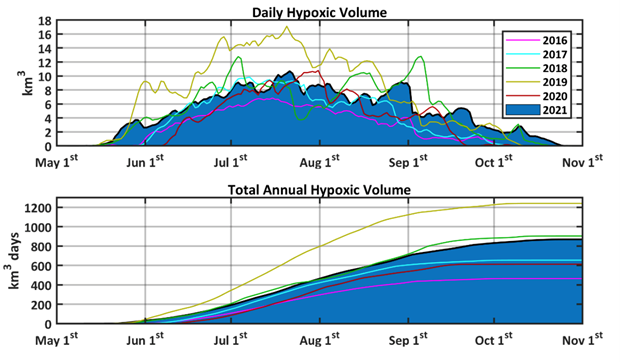 Although the Chesapeake Bay experiences hypoxic conditions every year, the severity varies from year to year depending on temperature, wind, and nutrient and freshwater inputs. The dead zone often peaks in size during the summer and is one of the major water quality concerns facing Chesapeake Bay. Multiple metrics are used to gauge the severity of the hypoxia from year to year, including the duration of hypoxia (days), total annual hypoxic volume (overall yearly severity of hypoxia), and maximum daily hypoxic volume.

The size of the Dead Zone in 2021 was estimated to be approximately average sized compared to the last 35-years. As summer arrived, moderate winds allowed hypoxia to increase from May through mid-July, resulting in a maximum size of the dead zone similar to the average historical size.  This mid-summer peak is similar to what occurred in late July 2020, but smaller than 2019 when hypoxia was quite severe.

Because even a small decrease in dissolved oxygen can significantly impact fish and other marine animals, researchers track the nowcast and forecast on the CEBFS computer model, as shown by these images that forecast the effects of the passing remnants of Hurricane Ida.

Hypoxia was increasing at the end of August but then decreased abruptly in early September in response to the remnants of Hurricane Ida. Stronger winds prevailed following Ida, but unusually warm fall temperatures and high tributary inflows to the Bay counteracted some of the normal autumnal reduction in hypoxia. The warm and wet conditions in late summer and early fall contributed to the hypoxia lasting longer than in the past, continuing on for more than 89% of the historic years. Overall, the total annual hypoxic volume in 2021 was larger than in 67% of historic years.

Looking back on 2021, the duration of hypoxia in the summer shows how relatively early onset and late termination can result in slightly more total hypoxia, even with typical hypoxia levels throughout the summer. The health of Chesapeake Bay is complex, with last year’s dead zone ranking the second smallest since 1985, compared to this year’s average severity of hypoxia. As notable weather impacts the amount of hypoxia in Chesapeake Bay, these real-time forecasts of temperature, salinity, dissolved oxygen, hypoxic conditions, and other chemical factors not only help the community monitor the Bay’s health but also facilitate safe, public access.

December 3, 2020 – Anchor QEA and the Virginia Institute of Marine Science

A Tool to Engage and Empower: GIS Story Maps